Fencing as a PE Activity in High Schools 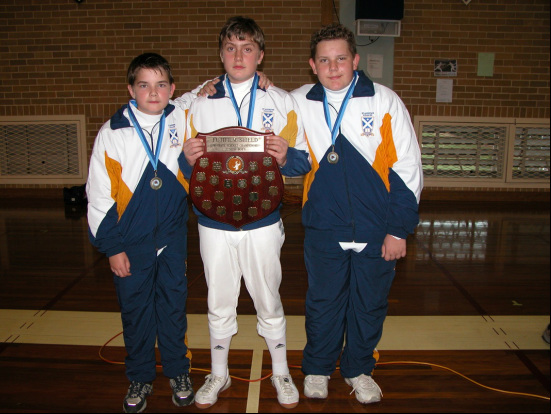 Fencing Team from St Andrews College, Marayong, 2008 NSW Schools Champions in Foil U13 (from left) Adrian Musel, Adam Kortynski, Alex Agaciak
Why introduce fencing into your school?
Fencing has been practiced for centuries and describes the sport of sword fighting with one of three weapons: foil, epee or sabre. With the study and practice of swordsmanship with these weapons fencing became the art of sword-play. Early on it involved deadly combat or the notorious "duel." Now modern is a quest for Olympic gold. The complex nature of fencing has led some to refer to it as “physical chess with the speed of light”.

The Program can offer sessions to fit in with before, during and after school, not only providing an hour’s supervised activity, but also allowing your pupils to develop new skills. The aim of the Fencing Programme is:
- to involve more children in sport,
- to identify talent and potential,
- to encourage competition,
- to increase the school’s achievements,
- to raise the profile of the school,
- to raise the popularity of fencing in schools, NSW and nationally.

Fencing as a PE Activity
Fencing is one of the most complete amalgamations of mind and body in the sport. It is flexible and easily accessible, in that it does not require specialized fields or courts and can be practiced in almost any open space, including cafeterias, auditoriums, and even open classrooms, making it perfect for urban areas without space for physical education. Fencing is a year round sport and even at novice levels, provides effective cardio-vascular and skeleton-muscular exercise, with benefits for improved posture whilst at the same time requiring mental/cerebral effort thus improving reaction times. It teaches hand-eye co-ordination, improves concentration and perception, core stability and balance, mobility and sporting etiquette, discipline and social behaviours. It suits all age-groups and children of all shapes, sizes and degrees of fitness because fencers can develop and participate to a level that suits them. It is also novel and different often appealing to those who do not naturally gravitate towards the commonly offered field and/or team sports. Many young people who are not motivated to participate in team ball sports successfully find than they can preserve their individuality and achieve respectable results in fencing. Fencing is also an exceptionally safe sport, with fencers suffering fewer injuries than athletes in most other sports like golf, lawn balls, swimming, tennis and soccer.

A typical 60-minute session is designed for both boys and girls and would include warm-up and stretches, reaction-time exercises and fencing-related games, footwork practice, group
lessons on technique and tactics, and free-play, all under the close supervision of a properly qualified coach.

Benefits for Children
Fencing is particularly beneficial for children as is one of the most enjoyable of all exercise forms and benefits of fencing apply into every area of child’s physical and intellectual being. An hour’s active fencing burns over 400 calories and a competitive 9-minute bout can use up as much energy as a 1.6 km run!

Physical strength, coordination, speed, agility and self-confidence are just a few of the qualities this sport requires of its participants. Children learn how to judge and determine their opponent’s intentions, behaviour, reactions, habits and character so as to anticipate their actions. They learn to analyse problems, make split-second decisions and take immediate actions.

Fencers learn to enjoy winning and profit from defeats, while becoming physically fit and healthy. The anxious or worried children become more confident and assertive as they learn to move and control own body. Development of strategically thinking and other skills gained through fencing can be applied to any situation of conflict or competitive interaction with other people in everyday life.

There is a progressive pathway available in the fencing and students wishing to develop further their skills and compete at the higher level will have an opportunity to join fencing clubs and continue practicing fencing after school hours. Fencers applying for undergraduate places at Universities can receive bonus points on their ATAR under the Elite Athletes programs. Fencers have a number of opportunities to combine their passion for playing sport when studying both in Australia and overseas.

Benefits for School
It has been proven that physically active children are not only healthier but also they do better academically. Fencing will contribute to increasing the school’s achievements in sport and raising the school’s profile. Over the period of last few years fencing has become more and more popular. Many prestigious schools offer fencing in their Co-Curriculum.

The NSW schools fencing program run by NSWFA is the most successful in Australia. The boys and girls may represent school at individual and team schools events in NSW and Australia which are contested in age groups.

Competitive sport gives children the chance to be the very best they can be and helps us find the champions of tomorrow. This fencing program will enable school to offer an attractive competitive sport to their pupils and helping more of them to achieve their potential.