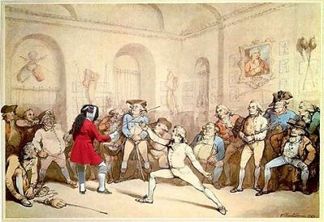 Fencing is the sport of gentlemen. It is the Fencing Master's strict moral duty towards his artistic ancestors to see to it that centuries-old traditions are respected, honoured, and enforced." Aldo Nadi
Fencing is the noble, historic art of of fence and defence with a sword. Fencing originated as the practice of swordsmanship to prepare men for duels and warfare. The history of fencing stretches back to the days of ancient Egypt and Rome. It has developed over many centuries, through the fast and elegant Renaissance period and into the modern and popular sport of fencing that we know today. Fencing has always been regarded as more than just a sport; it is an art form and a deeply personal, individual form of expression. Fencing has been practiced for centuries and describes the sport of sword fighting with one of three weapons: foil, epee or sabre. With the study and practice of swordsmanship with these weapons fencing became the art of sword-play.

Early on it involved deadly combat or the notorious "duel." Now modern is a quest for Olympic gold. The complex nature of fencing has led some to refer to it as “physical chess with the speed of light”.
As an exercise based on skill fencing began when the longer, lighter rapier was developed in Italy during the 16th century. The object is simple: for one fencer to hit another without being hit first. Its application however is more complex, scientific and artistic.More exiting information about a hoistory of fencing you can find in attached FIE document 'Fencing History'.

Download File
Please tell a friend about us and fencing.
Google Analytics